Part of the reason I couldn't go to Houston to see my photo was the quilt show clashed with our half term holiday and it would have been a bit mean to leave DH with the monsters. We visited in-laws and spent a few days in York, cunningly arranged so I could visit the Quilt Museum (www.quiltmuseum.org.uk/), as I hadn't been yet and the Sashiko exhibition at the York Art Gallery.
DH took the monsters to the train museum, which they loved and I would have hated and I got a few glorious hours looking at quilts and Japanese sashiko textiles. The sashiko show was amazing. It was well researched and I loved the make do and mend tradition it comes from. It makes me feel guilty for throwing out socks with holes rather than repairing them. The layers of repairs and shades of blue and brown made beautiful compositions. Michele Walker, who curated the show, wrote the book on quilting I used to have on permanent loan from the library. She has also created a website with lots more info and images (http://www.sashiko.org.uk/). It's well worth a look. Not surprisingly, there will be an article about the exhibition in Popular Patchwork some time soon.
As an added bonus, I saw Five Sisters at York St Mary's. It's an installation of pottery mosaic and paintings by Emma Biggs and Matthew Collings. I was rather taken with it and took lots of photos. I also love the idea of work being created specifically for this medieval church. It didn't use the space as well as I think Caroline Broadhead's piece did a number of years ago, but it was still worth the visit. 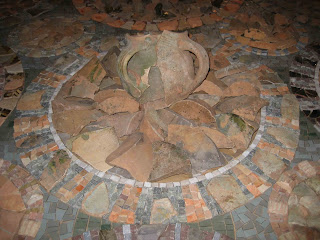 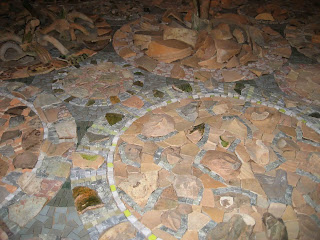 Whilst I was taking the photos, the monsters were playing with the mosaic tiles left out for the kids to play with and created this. 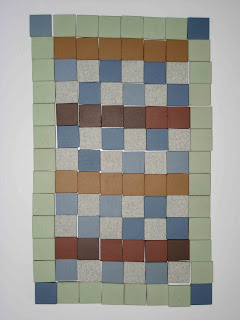 Has it really been this long?

Been having a bit of blogger's block. I've had to cut down on my work time this academic year to allow the middle monster more time at school nursery as he starts school next year. This just means lots of ideas and no time to do anything after I do the Popular Patchwork subbing. I have also written many blog posts in my head, but they have never quite made it to the machine. Anyway, I am back online and actually thinking about a new series of work.
But before I get to that, as it is still all based in my head and not even on paper, some other things to share.
I have had my first work exhibited abroad - I'm thrilled. The cobweb photo on my last post was included in The Eye of the Quilter: Inspiration exhibition at the International Quilt Show in Houston. The first I knew of it was when a hand written envelope with an American stamp on it arrived addressed to me. It had to be exciting - and it was. Two comp tickets were also included to the show and I spent a pleasurable hour trying to work out if I could go (it was 10 days beforehand) and what it would cost and the logistics. So it wasn't really possible this year, but I've already started planting seeds in DH's mind for next year. Playing around on the internet last night I found images of the exhibition, including my piece (top left on the photo). There are lots more images of the show at http://www.quilts.com/ I so want to go next year!
(Image copied from http://www.quiltart.com/eob/) 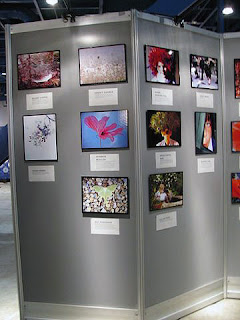