In a flurry of enthusiasm at the Quilt Exhibition at the VandA, I suggested to Jane, the editor of Popular Patchwork that I should make something inspired by the quilt George III reviewing the Troops; the one with all the circles.  We agreed that a circular pincushion would be a good idea as it would be small and so quick to make and it would be something useful.

Rather than copy one of the circles from the quilt, I started playing around with a compass and drawing various patterns and so ended up with this design. 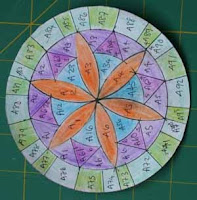 I was quite happy with it and decided to make it using Oakshott cottons, as they have such lovely rich plain colours.  I am making it by hand, using paper piecing.  However, when I came to cut the pattern pieces last night, I realised that it wasn't practical.  The pieces were too small to get good definition of the shapes and there were hundreds of them, especially as the pin cushion is going to be double-sided.  It makes me realise what enormous skill went into that 18th century quilt.
So there were two options, back to the drawing board to simplify it or enlarge the pattern.  Well, I don't think anyone wants a huge pincushion, so I've made the pattern easier.  The colours aren't so strong on the drawings as they were done quickly to work through the colour options.  So it will look very different when finished.  Imagine it in luscious rich colours and hopefully that is what it is going to look like soon! 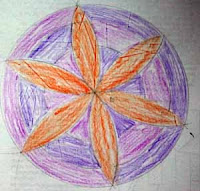 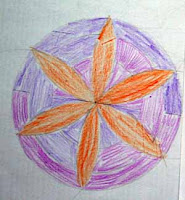 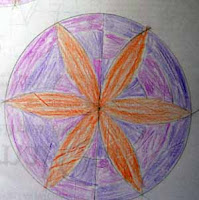 I think I'm going for the third option of design (the differences are where the purple and pink are placed as it isn't very clear from these images), but I don't have to make the decision until I've seen the fabric laid out as the piecing is gonig to be the same for all three.
Posted by Gillian Cooper at 10:41 1 comment: 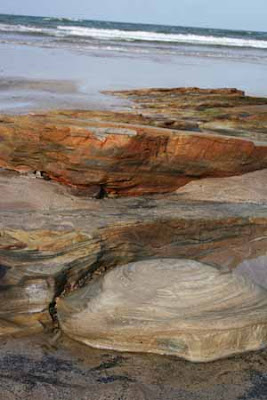 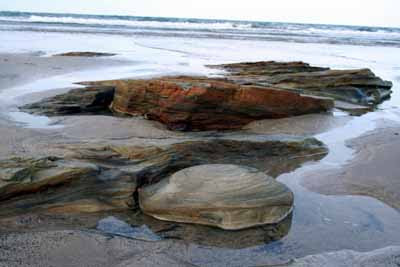 I've been a bit quiet as we have been away on a family holiday in Northumberland.  We had a fantastic week, exploring castles and playing on the beach.  The rock structures were really exciting and whilst sandcastles were being built, along with various canals, I spent some time photographing the geological features.  I have a large collection of photos of rocks, still waiting to find their way into my work.  But it is always good to add to the set.  It got me thinking about ageing and how somethings and people age better than others.  These rocks, battered by the sea, day in day out, still look fabulous and the roughness of the sea adds to their good looks as they become smoother. 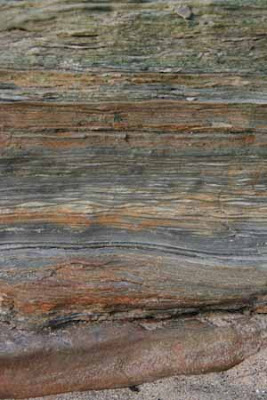 Blurred images on my conscience

I’ve been playing around with my 37 steps images again, trying to work out how to make a piece that shows all the layering of the images on top of each other, as your brain processes and then ignores them. So to try it literally, I layered the images in photoshop. The resulting images are rather ghostly. I’ve just got to work out how to use them! 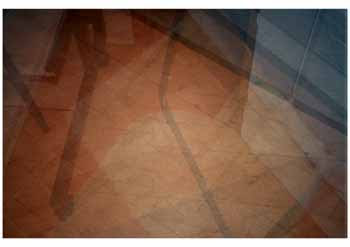 Step 108 - a quilted piece for charity 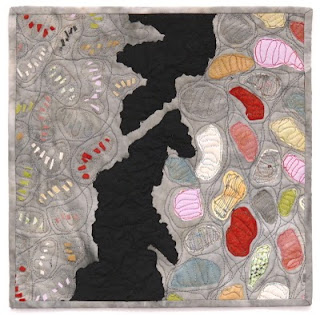 This little piece (12inches square) has just gone on the SAQA website as part of their benefit auction, which is taking place later this year.  I'm pleased with how it looks and how well they have photographed it.  I'm also pleased I kept sampling and didn't stop at an earlier stage.  It was made before I started on the big piece shown in the previous post and gave me the confidence that I had developed something that would work on a larger scale.  The bigger piece is still under the sewing machine and I had a shopping trip on Saturday, when I bought four different shades of grey for the quilting - grey heaven for me!
Posted by Gillian Cooper at 11:51 1 comment: