How to: Use Markal or Shiva Paintstiks on Fabric

One of my favourite colouring tools for fabric is Markal paintstiks.  They are oil based and are very opaque, so can be used over any colour, unlike dye or Inktense.  They come in both matte and iridescent which is a bit pearlised or slightly metallic.  Now I don’t do glitz, but for some reason, I love the iridescent Markal – they just bring a bit of a lift to the work.  Note: Markal and Shiva are the exact same things.
I recently wrote a how to use Markals with stencils, which is in the current edition of Popular Patchwork.  This is an abbreviated version of what is in the magazine. 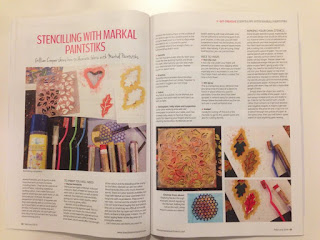 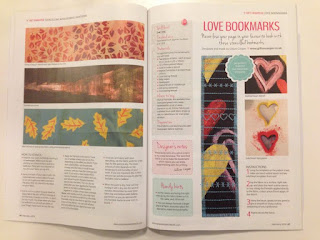 You will need fabric, stencil, Markals and a short stencil brush (a toothbrush is perfect).
How to:
1.   Make sure that you have your table covered as Markals are very permanent!
2.   You need your fabric to stay put, so tape in place or use some spray baste, like 505.  You also need to hold your stencil in place over the fabric the same way.
3.   As the paintstik is oil paint, it will form a skin, which you have to remove to get to the paint, either by rubbing with a cloth or cut off with a knife.
4.   Load your brush with paint and apply to the fabric in circular motions.
5.   The colours blend really well and I often add several colours in a piece.  Some people will blend the colours before apply to the fabric, I prefer to mix on the fabric so the blend is not too perfect.
6.   Leave to dry – be patient it takes a long time, like several days.  Once dried, iron the fabric between two layers of baking parchment to make the paint totally permanent.
You can use bought stencils or cut your own.  I use both – I like the bought ones when it is something I couldn’t cut myself and The Crafter's Workshop ones have generous use policies, so I don’t need to worry about breaking copyright.  My own, I cut from heavy photocopy paper with a scalpel, normally through two layers so I have a spare version.  I have used freezer paper as it is good for positioning as you can iron it on to the fabric.  However, to my cost, I discovered that it does not peel off wet Markal paint – only use on bare fabric!


There are lots of different ways of using Markals, some more subtle than others, perhaps that will be for another blogpost.

Email ThisBlogThis!Share to TwitterShare to FacebookShare to Pinterest
Labels: how to, markal, paintstiks, popular patchwork, stencilling, the crafter's workshop

Things to do with Gelli Plate Prints - 2 Make Books

Following on from last month’s post of making sketchbook covers from gelli plate prints (see here), how about making actual books from them?
I tend to make lots of prints in one go and to be honest, for every print I see potential as an artwork, there are at least two others which, if I can put it politely, are only suitable as backgrounds or to be printed over again.  Many of these are on paper as you need less ink to print on paper compared with fabric, so often my second print is on paper.  Also, if I am demonstrating quickly, the results may be less impressive and on paper.  For how to gelli plate print, see here.
So as you can see, I have a large pile of paper prints to be used.  Making little books is a great way of using them up.  And it doesn’t need to be difficult.   A sheet of paper cut in two, joined to make a long strip, then concertina folded can be really effective.
All the books I’ve made are blank so far, but at some point, I will use some as sketchbooks, others may have photos added as special photo albums and some of the simple ones may be turned into fancy birthday cards.
This one has pages made from prints on copier paper, but the outside is made from slightly thicker card.  I’ve then bound it together using a Japanese stab binding and put little beads on the end of the binding threads.
You can make traditional books in sections, like this one.
It is four sections (or signatures), each with four sheets folded in half and then stitched together.  At some point, I will add a cover.
These little ones are made from one sheet, with no stitching required, folding the paper into 8, cutting in the middle and then folding up again.  I’ve also folded up the bottom of the page to make a little pocket-like structure.


Lots of ideas, but this still leaves me with a huge pile of prints – more makes coming soon!

Happy 2016 everyone!  I’ve had a lovely, long break and am finally getting back into the swing of things.  The kids are now back at school, I had the Diploma Group over the weekend and now everything is back to normal, or as close to normality as they will ever get.
Normally after Christmas, I go comatose for several days.  All my plans to do something useful go out the window and I slump.  It’s probably my only way of relaxing!  This year, though, we did something different and on the 27th, we caught a train down to London, spending 4 days exploring the capital.  Although R and I lived there for many years and, indeed, the eldest was born there, the kids are definitely village children as we discovered!  It probably wasn’t helped by staying near Angel and using the tube station with the longest escalators in London.  However, we all had a magnificent time, concentrating on our favourite things: galleries, food, books and friends.
I got to go to the Fabric of India exhibition at the V&A, which was amazing.  You couldn’t take photos, but I’ve just checked and there is a fabulous website supporting the exhibition, which has now finished, including some really interesting 2 minute videos, which were running in the galleries.  The V&A was also the kids’ favourite museum, perhaps because they didn’t spend the two hours I did with Indian fabric, rather R took them round lots of different galleries whilst I absorbed the special show on my own.
Of course the catalogue made it back into my suitcase and I’m enjoying slowly making my way through the essays while looking at the glorious photos.
We also went to the British Museum, where we went to the Greek and Egyptian Rooms.  I saw even more beautiful inspiring figures, which just had to be photographed and the kids liked the mummies more than the marbles.  Here’s an admission: I was definitely in my 30s before I realised the Elgin Marbles were the Friezes on the wall rather than a pile of balls...).
I had less luck convincing them about modern art at the Tate Modern, but they enjoyed the views, while I appreciated some art.  In both places I also spent lots of time in the fabulous bookshops – so many amazing books in two venues.  Unfortunately, given that I had to carry everything home, the number of books was restricted slightly, but maybe on my next visit...
We also saw some tourist sites, ate fabulous food, trying out lots of different types (Mexican at Wahaca the winner, closely followed by the Thalis at the Masala Zone) and met up with some old friends and their kids.  And although part of me misses living in London (the buzz, galleries, bookshops, speed of life), I am sure we are in the right place for us now.  Just got to make sure I get my fix of the bright lights every so often!


It was also dry and sunny in London, unlike home, where we have had unremitting rain for weeks, but we are very fortunate here in that we are not at risk from flooding.  Now to get on with getting back into a routine and getting on with some work.

Posted by Gillian Cooper at 13:25 No comments: