Latest in the Muses - Unseen Time

This is my latest work, completed just in time for the Show at the SECC earlier this month.  Although it may look rather different, it continues on my Unsung Muses theme.
The design comes from a detail of the painting of a Cycladic figurine.

Nowadays, when we see them in museums, they are gorgeous shaped pieces of stone, but originally they were painted in such details and colours that they would seem gaudy and garish to our eyes.  These details have been worn away by time, but due to some amazing science, archaeologists have been able to work out what they looked like - the different colour pigments in the paint apparently wore the stone down at different rates, so they can identify where was painted and in what colours.
I have been musing over this image for a long time and there are a number of different pieces in progress using it.  For this one, I pieced lots of bits of hand dyed, painted and stencilled fabric.
To get it to gel together, I overpainted it with gesso mixed with some ultramarine and burnt sienna paint.  This gave a lovely surface to work on.
The painted detail was then added in Markal paintstik.  I used a mix of the matte and iridescent colours.  Once dried, I stitched around in, free machining in matching colours, adding some more licks of detail.
Finally, I stitched in the patches to give more interest in the background.  As it had to fit in with Turning Point's Magnification collection, I cut it to size.  I've left it raw edged as I wanted that distinct edge - if I had bound or faced the edges, it would have made them too soft.
I still don't think I've finished with this image - perhaps I will finish the other pieces based on it which are still in progress.

Posted by Gillian Cooper at 11:06 No comments:

Things to do with Gelli Plate Prints - 3 Make Quilts

Having spent the other weekend at the SECC showing people how to use Gelli Plates and making lots more prints in the process, I thought it was time for another in the series of what to do with the prints once you have them.  This time I'm suggesting you make a quilt.

This was one of my new quilts which was on show for the first time at the SECC as part of the Turning Point display and the background was made entirely from Gelli Plate Prints on fabric. 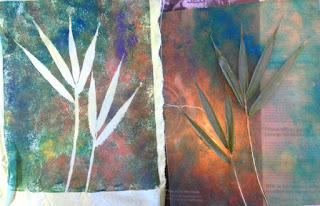 I showed you how to Gelli Plate print in this blog post here, using the bamboo as an example. 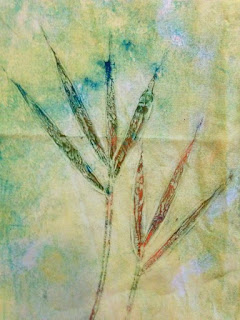 I deliberately printed onto dyed fabric as I seem to have something against white at the moment!  I had a big pile of prints on a variety of different fabrics. 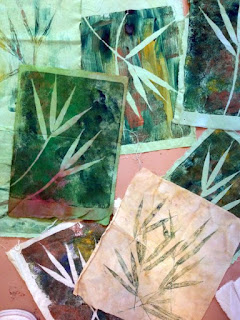 To make things easier for the piecing, I decided to piece them into columns.  Each column was a different width, but it stayed the same width all the way down.  I put the prints on my design wall to decide upon the layout, then pieced them all together.  I had intended to use a variety of fabrics, but in the end, I liked the simplicity of the prints on cotton. 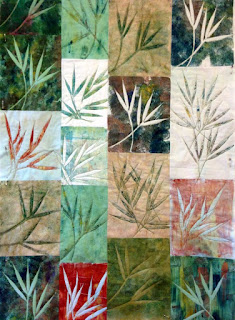 Rather than add the different fabric prints, I added several pieces of sheer with bamboo leaf shapes cut out from it. 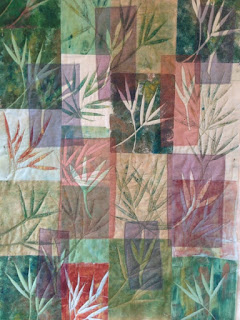 This is becoming like a game of spot the difference between the photos!  As the quilt was going in a group show, it had to be a specific size, so I trimmed it to fit.  I felt it needed something else on top.  I had always envisioned black bamboo on the top, but then I discovered my roll of purple and blue silk sari strips and fancied trying those.  I didn't think the colour contrast would be sufficient, but I really liked the strips, so wanted to give it a go. 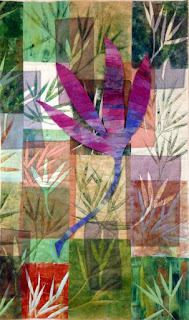 I was right  - it didn't work!  Also, the shape of the leaves were not quite right, so I redrew it and cut it out of black fabric.  I will eventually Gelli Plate
print a background for the purple/blue leaf. 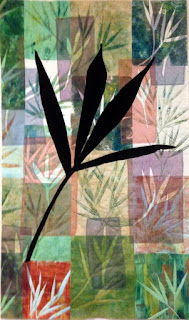 I liked it a lot better and spent quite a time considering whether anything else was needed.  I decided to leave it (either less is more or I was worried about spoiling a quilt when I didn't have time to make another!).  All that needed to be added was the black binding.  Originally I was going to bind the edges using the same fabric as the prints, but it needed the black to pull in the leaf. 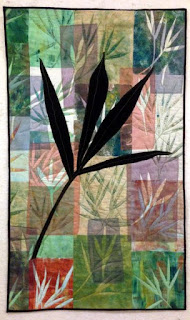 I now have several prints left over to play with further and lots of bamboo shoots cut out from sheers!
Posted by Gillian Cooper at 12:49 2 comments:

The Stitching and Quilting Show at the SECC, Glasgow

Today I'm back in the studio after four very busy and fun days at the Stitching, Sewing and Quilting Show at the SECC.  That's a bit of a mouthful, so I'm just going to say 'Show' from now on!  Sorry for the quality of the photos - I just used my phone and it's getting a bit worn now.
I took my Muses for an outing and they looked great against the black background - it was the first time I've seen them against black and it definitely worked and added something different.  Yesterday was Mothers' Day here in the UK and R bought the kids in to see the Show/me in the afternoon.  I haven't dared ask them about what they thought about the quilts, but their two purchases were cheese and chocolate!
I had a table set up with info about my work and also about my classes.  I'm going to offer the C&G in Creative Sketchbooks in my studio starting in September, so it was good to be able to tell visitors about that and my other one and two day courses.
I also took my gelli plate and Markal paintstiks and my friend, Rachel, and I spent the four days demonstrating how wonderful they were.  Amazingly, we kept the mess under control and I now have a fabulous array of prints on paper and fabric to work with.
I was selling both the gelli plates and Markals and intended to put an A4 sheet in with each of them so that anyone who purchased them would know what to do when they got home.  I got a bit carried away and ended up writing a 20 page full colour booklet on each technique instead.  I'll be adding them to my website soon.
My two newest pieces were in the Turning Point display, which was lovely (more details on them in a later blog post).
It was also great to see so many of my students there and to see their work in the competition and on other stands.  In particular, a mega congratulations to Senga Bain for winning the art quilt category with her parrot quilt.  It was magnificent.
So now I'm in the Show aftermath, with all my work/junk back in the Studio and I need to get it all sorted before the next class on Thursday, when I'm running a two day course in Sketchbooking.

Posted by Gillian Cooper at 14:57 No comments: