Last week was a rather busy week for me.  I visited Frieda Oxenham's fabulous exhibition in Peebles (more of this later) and also two visits to the Loch Lomond Quilt Show.  The Loch Lomond Show was a good one this year, with a huge variety of types of quilt on show.  I am currently writing about it for Popular Patchwork, but thought I would give you a flavour of some of the great quilts on show.

Posted by Gillian Cooper at 22:06 No comments: 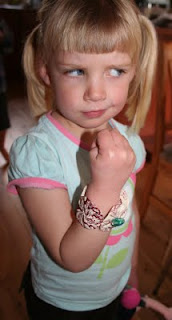 This is just a piece of fun.  I wanted a break from 'real' work and make something quick and easy and undemanding.  So here are two little Yo-Yo or Suffolk Puffs to use the English as opposed to American name bracelets that I made.  As you can see, my model was really cooperative!  Instructions will be appearing in Popular Patchwork sometime soon. 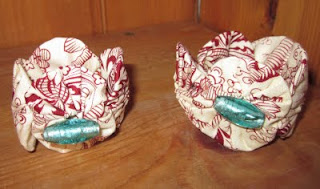 Posted by Gillian Cooper at 09:53 No comments: 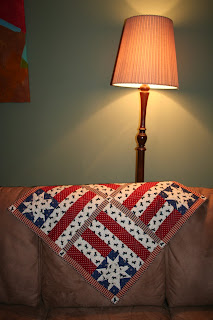 I've become a little obsessive into researching articles on old quilts at the moment. I have written a feature on feedsacks and their use in American quilting for Popular Patchwork and spent ages trying to find out more and more. I also saw a block that attracted my attention at the International Quilt Festival in Houston, which was part of the Cindy Rennel's collection. It was called New York Flag. I've been trying to find out more. I have traced it to a book published in 1976, (this was after I had drafted my own version) based on a series of quilt blocks published in an American magazine 100 years ago. I really want to find out more, but it was require a trip to the British Library in London. I'd love to do it, but honestly, I think it would be rather extravagant to travel 400 miles when I have little time or money to spare just to see if this magazine actually gives me more information, when it probably won't. How long do you think I can hold out? In the meantime, this is a little four block quilt I made using the pattern. Every now and then I like to just make something traditional, to see if I still can and so I don't lose the skills. Besides it was fun! I bought some red, white and blue fabrics in Houston, not my normal style as the white one could even be termed 'novelty', something I usually avoid like the plague, but some how they found their way into my hands and now I've used them. This must be something of a record, me using fabric within six months of buying it! I hope the instructions for this block will be appearing in Popular Patchwork once I have figured out some more of its back story.