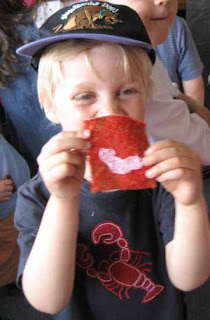 In a moment of weakness, I agreed that the local school nursery could come round to my Open Studios.  They are all aged between three and five.  They came in two groups, each with about sixteen children and it all went remarkably well.  We split the groups so half played in the garden, whilst the others came and looked at the work.  They loved the idea of the knitting and felting and all of them had a go on my Huskystar embellisher (needle felting machine).  You forget how much they have to learn at that age and few of them could manage a foot pedal and moving the fabric with their hands at the same time, but they loved the result, as you can see from these photos. So did the staff, so I may have to go in and do some more with them at some point next school year to make a bigger hanging for the nursery walls. 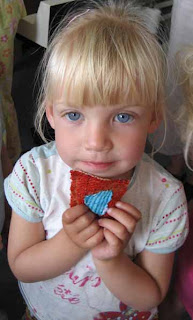 My little talk obviously made an impression on them.  My youngest is also the youngest at school nursery.  She remembered that wool came from sheep, although she was talking about woolly cows.  When asked what you use wool for, she replied 'artwork'.  I suppose she has never seen any practical knitting or textiles being made at home!
Posted by Gillian Cooper at 11:06 1 comment: 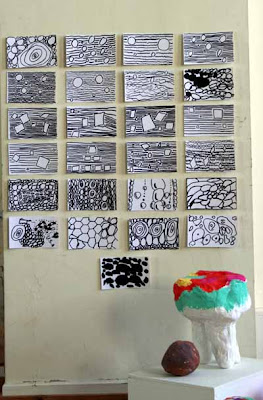 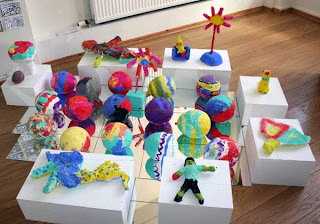 On Saturday, we had the first exhibition of the work the children had made in our classes. When we got it all set up, we were impressed at the quality and variety of the work on show. We hadn't realised how much there was.  In just six sessions of one hour, they had made cut paper collages on black card, plaster of paris models, which they painted, ‘stained glass’ using tissue paper and sheets of acetate and some felt. There was also two group collages of houses and trees and each session they had drawn little postcards inspired by famous artists and we put some of these on the walls too. 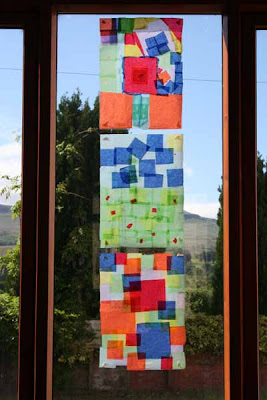 At the same time as the exhibition, Dawn ran an open art session and visitors could add to the tissue paper rainbow, draw houses or people for a huge collage or add wishes and drawings to a little tree.  I felt a bit guilty as I couldn't be there once it opened as I had the Open Studios on, but everyone told me it looked fantastic and they had a great time.  And we have several children who have signed up for next term already. 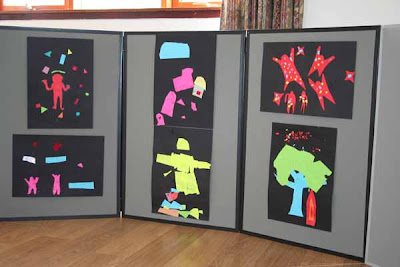 Open Studios is now on! 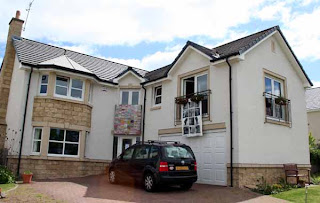 Yes, you can come and visit my studio at the moment as part of Forth Valley Open Studios.  So far this week, I have had over 60 visitors ranging in age from under a year to lots more than that.  Just to show off that I did manage to tidy my studio, here are some photos of my studio and the work set out in my living room and on the landing.  It was a bit frantic getting it ready.  The rest of the house is as untidy as normal, but I am proud of myself for actually tidying and not doing much 'dumping' into other rooms and closing the door.
To make sure people know which house they are meant to be visiting, I've hung some quilts out from the upstairs windows and wrapped the lamposts with some of the knit I made to go around trees. The local children love it! 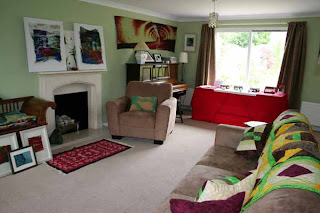 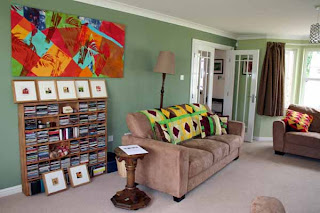 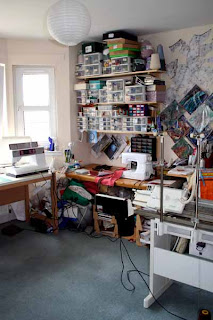 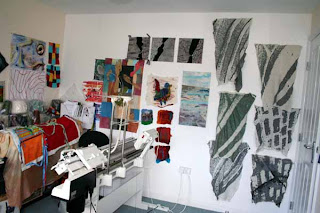 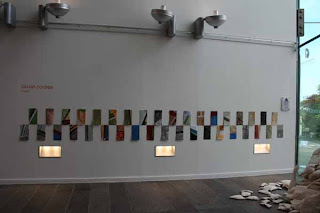 Last night was the Private View of my work in Dundee, at the grandly titled 'Innovation and creative development in craft' exhibition at the Dalhousie Building, part of the University of Dundee.  The 37 steps was hung again and it is exciting to see how they change with a different layout.  Unfortunately we couldn't get a suitable room to show the knitted pieces with the projection so it was on a video instead.  It also felt strange seeing it on film as you miss the tactility of the piece and the ability to become part of it.  It seems rather distant.
Of the 37 steps small pieces, a number of people commented that they were like aerial shots of fields or countryside.  This is interesting as they are based on a form of aerial shots of the ground, only taken from hip level, not from an aeroplane high above. 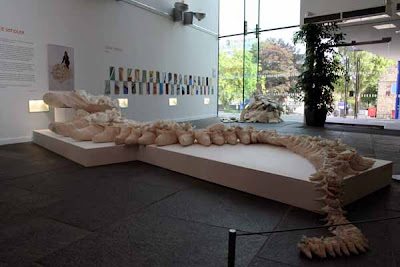 The second shot of my work also shows Jeanette Sendler's majestic piece snaking across the floor, based on shirt collars.
I've stayed up in Dundee to attend the Prototype - craft in the future tense Symposium, connected with the Past, Present and Future Craft Project.  Although a quick look at the programme made me wonder whether it would be for me, it has been absolutely fascinating, throwing up ideas about what is craft and how should I get my work out to the 'market' in jargon terms.  The speakers today included Constance Adams, who works with Nasa, designing things for space missions and other by-products.  She told the lovely story of when they discovered years ago that biro pens wouldn't work in space, the US spent millions designing the space pen which can be used anyway up.  The Russians just used pencil!  You can draw lots of different conclusions or angles to this!  The other speakers were just as interesting, talking about the theoretical models behind creating prototypes and some real life examples of craft 'prototypes' from Hazel White and Chicks on Speed.  There is still another day to go and I am sure it will be just as good - at least I hope so, as really I should be at home tidying the studio for that all important Open Studios Event which starts at 10am on Saturday.  I still haven't cleared the floor enough to hoover, but on the plus side, it has been like an archealogical dig excavating down the levels of things pushed off the side of my desk onto the floor.  I've discovered lots of things I didn't know I still had!
Posted by Gillian Cooper at 20:35 2 comments: 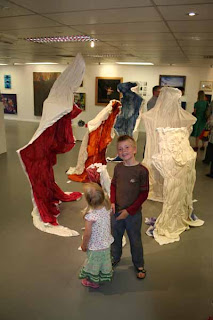 Friday was a busy day.  I was up in Dundee hanging my work for an exhibition that opens on Wednesday at the University of Dundee.  Then in the evening was the Private View of the exhibition accompanying the Forth Valley Open Studios at Delta Studios in Larbert.  We decided to be mad and take the children with us.  They didn't rate the private view as there were no crisps.  Makes it bottom of the list for them!  However, they had lots of fun taking photos of each other, especially of the youngest who decided to do a dance performance in front of my work.  I am showing my Shelter piece and I was really pleased how it looked in this location (the kids did like my artwork too and not just because it was good for playing tig through it!). 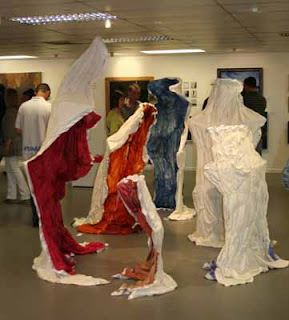 I'm now frantically trying to tidy up my living room and studio for the Open Studios which start on Saturday.  If you are in the area, please drop in.  There's going to be lots on show and my neighbour ,who runs a cookery school, Scotia Spice, is providing nibbles.  There are lots of other artists showing too. We're all on the website http://www.forthvalleyopenstudios.com/. 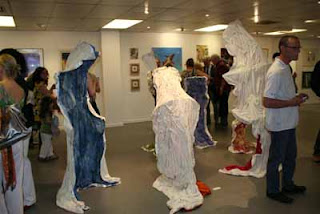